Hoka One One was founded in France in 2009 by Nicolas Mermoud and Jean-Luc Diard who previously worked with outdoor brand Salomon.

Nicolas and Jean-Luc wanted to design a shoe that would allow them to run faster downhill and this led to the invention of Hoka One One running shoes, the oversized outsole provided more cushioning than any other running trainer on the market at this time. Hoka running shoes are named after the Maori Language phrase which loosely means 'fly over the earth'

Due to the enhanced cushioning and inherent stability, Hoka One One was originally embraced by ultramarathon runners however they very quickly became popular with all types of runners due to the cushioning and minimal weight. The original models have the highest cushioning and are now accompanied by lighter weight shoes that still retain much of the brands signature cushioning while making them even more lightweight.

Hoka One One sponsors many athletes and runners who participate in track and field, road running, trail running and triathlons and they have long term sponsorship deals with professional training groups in Arizona, New Jersey and California. 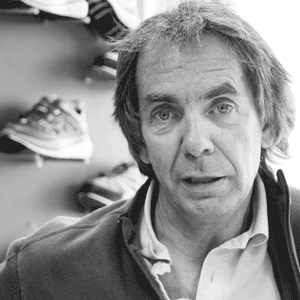 "Jean-Luc Diard
one of Hoka's founders"