As one of the longest running footwear companies in the World, Birkenstock (Birkenstock Orthopädie GmbH & Co. ) trace their roots back to Johann Adam Birkenstock who was registered as a shoemaker in the Langerberg local church archives in Germany way back in 1774.

Today the company umbrellas six brands; Alpro, Betula, Birkis, Birkenstock, Footprints and Papillo. Birkenstock specifically manufacture orthotic footwear and insoles which naturally mould to the feet of the person wearing them to give fantastic comfort and support.

In 1998 shortly after opening their latest German Warehouse in Asbach Birkenstock moved their headquarters from Bad Honnef to Vettelschoß, Germany, and implemented a new computer controlled processing system which allowed them to process, ship and receive 80,000 pairs of shoes a day!

Johann’s grandson, Konrad Birkenstock, owned two specialist footwear stores in Frankfurt and in 1896 he took the first steps in creating the companies now signature contoured sole. This was an innovation within the footwear world at a time when general footwear was extremely flat and basic offering very little in the way of support. Konrad spent the next 15 years holding seminars and giving lectures explaining his innovative ideas and procured a license to manufacture his contoured insole. This then evolved into the first flexible arch-support system for factory made shoes in 1902 a technology which is used in most shoes manufactured today.

Birkenstocks started distributing internationally as early as 1925 when their arch support systems were exported to Austria, France, Denmark, Czechoslovakia, Italy, Luxembourg, Belguim, Norway, Holland, Sweden and Switzerland. After hosting a variety of training seminars throughout Europe and gaining support from the leading medical specialists of the day Birkenstock became cemented as THE contoured footbed to be wearing. This was followed up with their book, Birkenstock’s Podiatry which was published in 1947 and has since become the most widely read and published book on foot health of its time.

The Birkenstock sandal was then born in 1964 when Karl Birkenstock developed his father’s (Carl Birkenstock’s) innovation. This is when the brand started to explode into the mainstream arena. The American Margot Fraser discovered Birkenstock sandals on a holiday in Germany finding unlike any other shoe she had worn, they relieved her from a painful foot condition. This inspired Margot to set up the trading company Birkenstock Footprint Sandals, Inc in Novato, California, to distribute Birkenstocks to the US market they then changed their operating name in 2005 to Birkenstock Distribution USA.

Birkenstocks venture into footwear as opposed to just insoles proved to be a revelation. The initial design was followed up with the creation of a modern classic in 1973 - Birkenstock’s two strap sandal, the Arizona. From the Arizona the Birkenstock sandal range went from strength to strength with new lines and colours added. Birkenstock now supply everything from clogs and shoes to sandals and flip flops. A brand that is sold and recognised worldwide they have come a long way from the humble shoemaker of 1774. 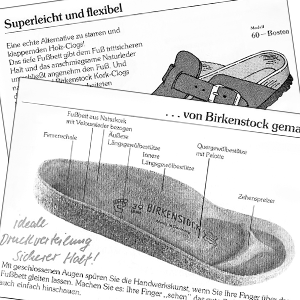 "Their book, Birkenstock’s Podiatry was published in 1947 and has since become the most widely read and published book on foot health of its time.." 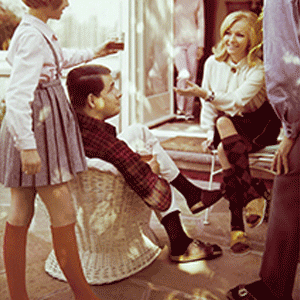