Blundstone are an Australian footwear company based in Hobart, Tasmania with deep rooted family values. These are also known as “Blunnies” with their no-nonsense leather uppers and elasticated sides creating a classic Chelsea boot look. They also make Wellies, men’s and women’s lace up safety footwear, school shoes, and heavy-duty industrial boots.

They have come a long way since the brand was formed by John and Eliza Blundstone. The couple who emigrated to Australia in 1855 arrived at Hobart on board the ‘Conway’ from Derbyshire, England. John set up the shoe business when he started importing footwear from England in 1870 and used his existing manufacturing experience to setup a footwear factory on Liverpool Street, Hobart. They then quickly opened two shoe shops on either side of Collins Street and John’s son joined the business to help it grow, it was renamed J.Blundstone & Son. John’s other son William then ran an import business for footwear and called this W.H. Blundstone & Co.

The brand, despite initially flourishing was then sold due to financial difficulties by the Cane family in 1901. They then ran the business as Blundstone Pty Ltd until the Great Depression in Australia which had a big impact on the shoe company and Blundstone & Son again changed ownership. This time two Brothers James T.J. and Thomas Cuthbertson took over the Blundstone name and combined the business with their own. They then merged the two manufacturing operations and retained the name for the tannery in South Hobart to represent the family values the brand represents.

Blundstone are still committed to making the same high quality products and today oversee all the manufacturing of their leather shoes. They currently source these from Vietnam, India and China with their own personnel ensuring the brands stringent quality standards are followed and as a result of this they are a Quality Endorsed Company to ISO9001. This attention to detail was also exemplified when they became the first Australian footwear manufacturer to receive a Design Award from the Industrial Design Council of Australia. They have far from abandoned their native roots however and they still manufacture upwards of 200,000 pairs of gumboots at their Tasmanian factory.

In 2011, Blundstone also became the proud official naming rights sponsor of the world-class cricket facilities at Bellerive in Southern Tasmania. They did this in an effort to allow more Tasmanians of all types and races; the young, the old, males and females, regardless of if they are abled or disabled to participate in cricket. Blundstone want to encourage everyone to enjoy this sport at an active grassroots level and at a representative level within this wonderful stadium. The Blundstone Arena is also shared with the Australian Football team, the North Melbourne Kangaroos.

To this day, Blundstone continues to manufacture high quality ankle boots made from premium leathers with a traditional Chelsea boot and chukka boot styling. 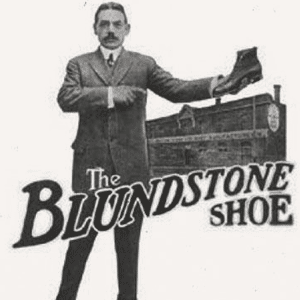