The History Of Chatham Marine Footwear

Chatham Marine pride themselves on being a Great British Company and from their founding in 1989 have provided the UK with high quality deck shoes as well as leisure and everyday wear.

In 2007 the Stuart Marsh Group bought Chatham Marine and from there the brand has gone from strength to strength. Chatham Marine is exported across Europe and now has over 400 UK stockists. As well as selling through their UK stockists Chatham also attend the large country and game fairs, and horse trials including the Devon County Show, The Royal Highland Show, The Three Counties Show, Badminton Horse Trials and Hopeton Horse Trials, usually accompanied by Max and/or Slinky - two dogs that have become firm favourites at the trade stands.

Chatham Marine are also partners of the F1 Team Force India supplying the downtime footwear for the team. They are also partners of Sunsail Racing and the Stokey Woodalls Atlantic Circuit sailing rally as well as sponsoring the Cowes Week regatta in 2013. They have 3 Brand Ambassodors – Izzy Hamilton, a team GB Windsurfer, Emma Hyslop, an equine event rider and Shelly Jory who is not only a business woman but also a British Power Boat Champion.

The Stuart Marsh Group is based in Exeter and has 3 labels under it’s umbrella one of which being Chatham Marine. The other 2 brands are; Rainbow Club who handmake and dye wedding and bridal shoes and most famously made the customised ruby slippers for BBC 1’s ‘Over the Rainbow’ search for Dorothy with Andrew Lloyd Webber. Stuart Marsh then has his own private label Sterling & Hunt which now manufactures shoes for high street brands like Clarks, John Lewis and New Look.

Until 1993 all production of their brands was done in their Exeter factory, unfortunately due to rising costs to keep the shoe prices competitive, production had to be moved overseas. All of the Stuart Marsh Groups manufacturing is now split between factories in China, Vietnam, India and Pakistan although all designing and hand dying remains in the UK. 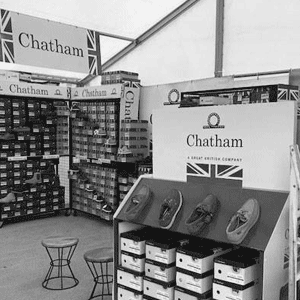 "Chatham at the Devon
County Show"