Globe is an international brand founded in Australia in 1994. Globe was formed by the brothers Peter, Stephen and the current CEO Matt Hill, they are one of the World’s largest skateboard distribution companies.

The two brothers Peter and Stephen Hill both started in the skate industry as pro-skaters as early as 1984. During this time they promoted existing brands but after getting tired of the quality of the kit they were provided with, they looked to import and distribute their favourite products from the states. This quickly grew as the brothers started to change the face of skateboarding in Australia. Peter and Stephen Hill first started trading as Hardcore Enterprises and they specialised in products that appealed to the skateboard and street fashion markets. They ran demonstrations and tours featuring a number of pro skaters including Alan Losi, Mark Gonzales, Christian Hosoi, Tony Hawk, Lance Mountain, Jeff Phillips and Jason Lee. This in turn had a huge impact on their success and saw them grow into a major player with in the boardsports and fashion markets before they rebranded in 1994.

Today, Globe International Limited produces their own stock which they export to over 100 countries around the world, in addition to their importing business. Globe have Offices, Distribution and Manufacturing Centres in Melbourne and the Gold Coast in Australia, Los Angeles in the US, Hossegor and Lyon in France, London, England and lastly Shenzen, China.

It's been a crazy ride for The Hill Brothers and they've come a long way since they first started skateboarding but they’ve far from lost their passion and even have their own half pipe at home. Globe now own FXD, Enjoi, Blind, Almost, Cliché, Darkstar, Speed Demons, Tensor and Gallaz. In addition they maintain licensing and distribution rights in Australia and New Zealand for Hardcore Distribution and 4 Front Divisions. Currently Hardcore Distributes over 30 brands including Girl, Lakai, Chocolate, Flip, Skatemental and Thrasher and they have production licences for Stussy, Vision Streetwear, Obey and Neff and they still continue to grow.

This wouldn’t be possible if they didn’t love what they do but skateboarding has always been their first love and to date they have written two books on the subject in addition to producing numerous skate related films. Globe currently sponsor teams in Skating, Surfing and snowboarding and oversee Globe International Entertainment, the broadcast production arm of the business who premiered their film 'Year Zero' in 2011. As a brand who continues to grow Globe are innovative, progressive and have a distinct passion about their work which few can match. 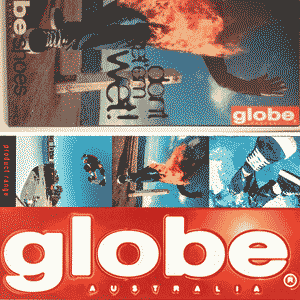