In May 1905, a small company called Bozeat Boot Company made its very first pair of hand made football boots. Whilst only operating from a tiny workshop in central England, the Bozeat Boot Company remained rather small and unknown to the wider public. That was until the company was purchased by the Jacobson Group and its name changed to Gola (think 'Goal') to reflect the Jacobson Group's mission to offer quality shoes for athletes.

This change of ownership brought about a large strategy to affiliate with many sporting events and teams. Before long, the name 'Gola' became highly recognised alongside 2 of its classic sporting fashion shoes called the Harrier and Chase.

Despite the unprecedented and disastrous affects of both world war 1 and 2, Gola survived and continued to provide its loyal customers with top quality products in-line with current trends and fashion. In the 1960's/1970's Gola became the number 1 sports wear brand and was worn by many sporting heroes of the decade. It wasn't until the late 1960's that Gola really took off with its staple style the Gola Harrier. In-fact even in the 1970's Gola also launched its shoulder bag which unbeknownst to them would become one of the most recognised multi=purpose bags of its time. Even today, the classic Gola bag is still as popular as ever and maintains its legacy look which customers continue to enjoy.

Gola has been around through the thick and thin, and has stuck by its customers through many trials and disasters. A good quality brand that is happy to adapt to the current trends and sporting needs. A true example of how a brand can be more than just a fashion symbol, Gola has and will continue to stand the test of time. 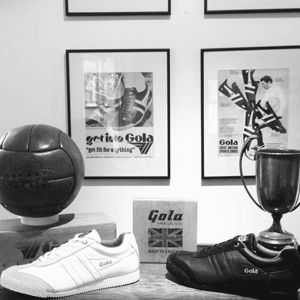