Hunter begins way back in 1856 when an American, Mr Henry Lee Norris from New Jersey and his friend Spencer Thomas Parmelee from Conneticut arrived in Scotland with a patent from Charles Goodyear to make rubberised outer shoes and boots. After landing in Glasgow they quickly found a factory lease, the Castle Mill in Edingburgh. It had already been partially occupied meaning by the summer of 1856 they went into production as the company Norris & Co.

They remained Norris & Co. until September 1957 when the first limited liability act was introduced in the UK, they then became the North British Rubber Company. The company made not just footwear but also other rubberised products such as tyres, conveyors, golf balls and hot water bottles and saw a huge growth with the staffing of the factory growing from 4 in 1856 to 600 by 1875.

During World War I they were commissioned by the War Office to make sturdy boots for the soldiers in the trenches, rising to the challenge the factory worked day and night to produce 1,185036 pairs of boots during this time. The War Office asked for their products again during WWII where they supplied not only footwear to the soldiers in the wet and muddy trenches but also gas masks and ground sheets.

By the end of WWII the welly boot had really developed adding thick rounded soles for durability and a roomier fit for comfort, they had also become much more popular for everyday wet weather wear. Post WWII the North British Rubber Company moved to a larger factory to keep up with increased demand.

1955 saw the release of the classic green welly which was the first orthopaedic welly boot made by Hunter alongside the Royal Hunter. The Green Welly was not an instant hit but with perseverance, it soon became a staple welly on the UK. Both the Green Welly (The Original Tall) and the Royal Hunter are still part of the Hunter collection today.

Tomkins streamlined the company and sold the Consumer & Industrial Division of Gates which included Hunter to Interfloor. A short time later in 2004 a management led investor group bought the Hunter Boots side of the business from Interfloor and for the first time in it's history Hunter became an independent company with the name Hunter Rubber Company.

In 2004-5 Hunter celebrated the Original Green Wellies 50th anniversary by releasing 7 new colours in the Original Tall. Each colour represented a different charity and their sales raised funds, over the campaign period Hunter raised over £250,000 for the charities. 2005 saw lots of extensions to the Hunter boot range including a collaboration with the Royal Horticultural Society. Unfortunately 2006 saw the Hunter Rubber Company going into administration due to high manufacturing costs causing large losses, a private consortium supported by Pentland Group plc bought Hunter out of administration and the Hunter Boot Ltd was born. Supported by a new management team Hunter re-established itself and in 2007 launched a brand new RHS collaboration at the Chelsea Flower Show.

High manufacturing costs were still a large issue for Hunter and in 2008 the difficult decision was made to move the production of the boots from the UK to China. More recently Hunter have collaborated with Jimmy Choo to create a limited edition welly which really put Hunters back on the fashion map and as a staple welly for everything from dog walking and festivals to puddle jumping Hunters presence in the footwear market is a strong as ever. 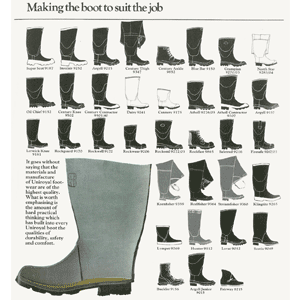 "These were the boots that shaped the world" 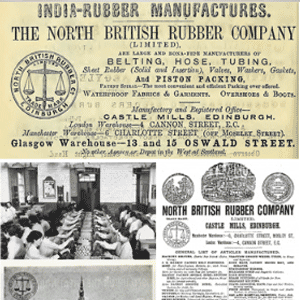