Established in 2006 in Switzerland by Karl Mueller Jr and Claudio Minder, Mueller being the son of Karl Mueller Sr. the engineer who invented MBT footwear. The company set out to provide shoes that promote the same unique health benefits as MBT, only with the aesthetics of everyday fashionable shoes, and with significantly less steep ‘learning curve’. While MBT shoes may require weeks of gait training, Joya aims to be immediately accessible.

The name Joya is a reflection on the company’s mission statement to ‘bring back the joy of walking’, this is achieved by their use of a soft sole that mimics the sensation of walking on deep sand. A prototype for the first Joya shoe was developed in 2006 and in the space of two years a handful of eight styles were being produced and sold initially in Germany and Switzerland. The success of the brand led to an expansion into additional national markets, with 11 different countries in 2011, to 25 countries, including the US and UK as of 2017.

The company has been awarded numerous accolades as a comfort shoe including Germany’s best functional shoe two years running (2013, 2014) by the specialist magazine “Markt Intern” in a nationwide vote, beating other functional brands FinnComfort, Sano (Mephisto) Ganter and MBT. The company also boasts endorsements from AGR, a healthy back campaign association gave Joya their seal of approval, an honour awarded to companies producing products that promote a healthy back, as assessed by an independent committee of experts in various medical fields. The award aims to guide consumers towards ergonomic products that help to promote back health.

In 2017 the company celebrated 10 years on the market, where they have seen a rapid growth in popularity and exposure in that time. The brand now produces a range of styles, from dress shoes, waterproofs, ballerina, sandals and more all with the unique Joya sole. 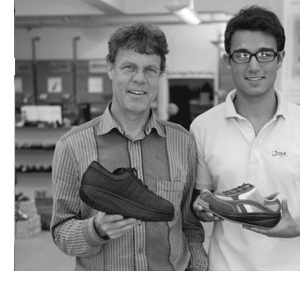