Keen have long been a value lead brand, as a company that creates products for people to experience the outdoors, they promote protecting the places that people work and play. A forerunning company that leads by example, Keen introduced their campaign Better Takes Action which aims to inspire the fans of Keen and their employees to be engaged in their communities, protect open spaces and to push positive outcomes. This campaign accompanies the longstanding efforts that Keen has made throughout the years, such as reducing the impact of its supply chain, only using leather from sustainable charities as well as raising 15 million dollars to donate to charities and good causes.


Kickstarted with a literal call to action in January 2018, the Keen team refurbished a disused telephone booth and provided attendees a number to call their representative in Washington. The event was held in Denver as a part of Keen’s exhibit at the Outdoor Retailer gear convention. In association with charities and organisations such as The Wilderness Society; Theodore Roosevelt Conservation Partnership; The Conversation Alliance and many more, promoting awareness of bills being debated on issues close to their hearts, such as clean river preservation and legislation on public land. To further help people take action an example script was provided to help those with what to say when they do reach their representative. The event epitomises the Keen ‘Better Takes Action’ campaign, educating people on environmental issues whilst teaching people how to make their voices heard and encouraging them to take part to make a better world because, as the campaign says ‘Better takes action’.


This summer the Keen team are taking their actionism on tour in the Keen boat, a vessel built out of recycled plastic that once littered the canals of Amsterdam and was fished out, courtesy of Plastic Whale- a social enterprise whose mission is to obtain plastic free waters worldwide. The tour will take place across Germany, The Netherlands, and the UK aiming to raise awareness for plastic pollution and sustainability issues. The plastic that is removed from water ways of north west Europe will then be recycled by Plastic Whale into expanding their fleet of plastic fishing vessels, and also put back into use in the form of the ever essential- office furniture. "Keen's boat"
"Made of plastic" 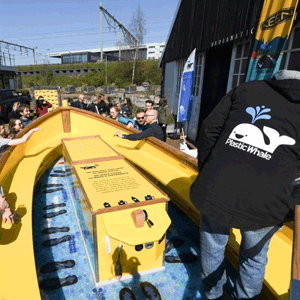