Mephisto began its legacy in 1965 by a gentleman called Martin Michaelis. Martin began manufacturing moccasin style shoes in France and introduced distribution in Austria, Belgium, Germany and Switzerland. Soon launching his products across the whole of Europe.

1973 saw Martin apply for his first patent in relation to a particular and unique manufacturing process.

This technique became the companys secret ingredient in producing excellent and long-lasting footwear. By 1975 Mephisto became famous and popular in its select distribution areas. The first Mephisto exclusive shop opened in Germany in 1984 and by 1987 Martin had expanded Mephisto in to the United States of America!

Mephisto continued to expand with shops appearing in Canada in 1989, and by 1995 Martin opened his 150th Mephisto store.

Arriving at 1998 we see Mephisto celebrate its success with 350 shops across 50 countries, 18,000 POS and 600 styles available. In this same year Martin launches the brand Mobils targeting specialised and orthopedic retail groups. During this time Martin won countless awards, but nothing felt as good as being awarded with the 'Best foootwear brand of France' in 1999, the same year the company expanded to Russia and Canada.

The brand 'Allrounder' became available in 2002 and appealed to all ages and was aimed at the urban hiking trend. Following this, Mephisto became a recognised lifestyle brand in 2003 and launched its first sportswear collection including clothing, accessories and care products.

By 2015, Martin and his family celebrated Mephisto's 50th birthday with its 800th shop worldwide and continues to grow and grow as one of the worlds most famous brands. 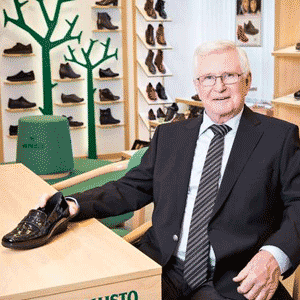