Palladium is a well established footwear brand based in the nineteenth century provincial country of France. Using tried and tested techniques, Palladium has grown throughout its rich history to become one of the most reputable boot manufacturers of its time.

Established in 1920, Palladium did not originally begin manufacturing footwear. In-fact Palladium produced aircraft tyres which greatly assisted soldiers during the second world war. Using a specific technique, Palladium were renowned for creating durable and trustworthy tyres and had hit its tyre peak towards the end of WW2. Due to the lack of demand for tyres following the war, Palladium changed its dynamic and ventured into the footwear market, using its experience and techniques that attributed to its successful tyre manufacturing.

By 1947, their first boot the 'Pampa' was born. Specifically designed to cater for the French Foreign Legion, of which Palladium had received its first contract for. The legion was drafted to the scorching north African deserts and desperately needed suitable footwear that would help with fatigue and provide ample support. The Pampa boot was made from a canvas material and was ideal for hot weather as it allowed the soldiers feet to breath. Henceforth Palladium continued to produce high quality canvas footwear for the military.

In 1970, Palladium started manufacturing sporting footwear, specifically tennis and basketball shoes. This was further promoted in 1980 when Palladium took the giant leap into the USA and from there its popularity boomed. By 1990 Palladium started producing premium leather footwear to help handle the lifestyle of urban street goers.


In 2009, Palladium was purchased by K-Swiss and the brand was relaunched for modern day adventurers whilst keeping the timeless classic design. Its range had undergone many improvements including improved rubber out-soles which were lighter than there predecessors, and upgraded stonewashed canvas for added quality. Today Palladiums rich heritage is well known and will never be forgotten. Palladium played a key part in kitting soldiers in the second world war and the brand has continued to grow across the globe. Palladium has a very loyal following from many different cultures and background, and will continue to satisfy customers who are looking for premium and historically proven footwear that stands the test of time and trenches. 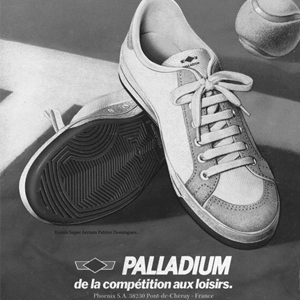