The pair would travel to nearby Boston to sell them in local leather shops, the shoes came in a plain white box and became known locally as “Rockport type" shoes, prompting the team to decide to brand their shoes as ‘Rockport’ and formed the Rockport Company in 1971. The aim of the company was simple, to produce casual shoes and dress shoes that had the comfort of a sneaker.

In 1983 former retail shoe buyer Bob Infantino who once purchased 4,400 pairs of shoes from Rockport founder Bruce Katz, began his employment for the company and would shortly become the Vice President of Product and Marketing.

Rockport’s push for comfort and innovation say their shoes being outfitted by some of the world’s best sailors, when in 1994, nautically inspired Rockport’s were worn by competitors in the Whitebread Round, the World Race, Volvo Ocean Race, the Clipper Round and the World Yacht Race

2005 saw the introduction of machine washable styles, and innovation continued in 2013 where Total Motion technology was introduced, a technology that increased the stability, flexibility and cushioning all while maintaining a lightweight construction.

The ethos from the start has been to produce high quality fashionable shoes that do not need to sacrifice comfort and practicality, while always pushing to be at the front of footwear technology and production standards, a tradition that continues to this day. 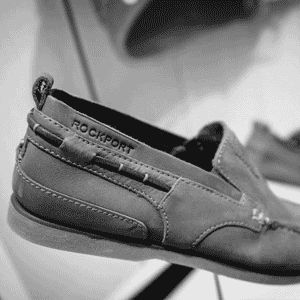