Salomon was created in Annecy France, a town proximal to the swiss border and significantly for the story of Salomon, the Alps.

In 1947 François Salomon opened a metal workshop, with help from his wife and son, initially to produce saw blades. In 1957 the company demonstrated the first signs of innovativeness that would come to characterise the company, when they created a machine that automates the production of steel edges for skis and at the same time revolutionised cable bindings on Ski boots, foregoing the previous standard of leather bindings and replacing them with cable bindings.

Only 19 years after their humble origins in Annecy, Salomon bindings made its first appearance at the 1966 World alpine championships in Chile. With these innovations in binding technology, including their Atlas safety binding and the first binding with a self-release heelpiece, Salomon became a preferred binding for ski boots, becoming the worlds leading manufacturer in 1972. In 1979 the company ventured into producing its own ski boots notably with the SX90 and a decade later the company produced its own skis. 1992 saw Salomon Skis appearing in that years’ Olympics held in Albertville, France, under 30 miles from the workshop opened in downtown Annecy only four decades previously. Importantly for Mastershoe, this year also saw Salomon venture into producing hiking shoes for the public, maintaining their focus on providing a product for the active adventurer.

Salomon shoes are an ever-present feature of competitive hiking, being worn by the record-breaking Kilian Jornet at the 2008 UTMB (Ultra-Trail du Mont-Blanc), at the same time as the advent of their Custom Fit Technology. The range of Shoes provided by the Salomon group expanded throughout the years, always aiming to provide a quality shoe for people who have a fondness for the outdoors And in 2011 the company produced their ‘Quest’ walking boots, a popular ankle boot that Mastershoe is proud to stock. Salomon have grown Mastershoe may not stock their skis (yet), however are proud to stock a range of Salomon hiking, running and trail running shoes for men and women available with our free returns policy. 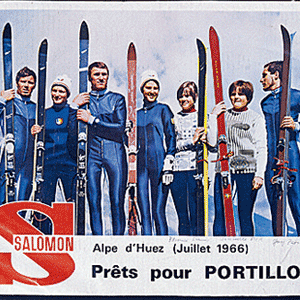