DC Shoes roots begin in 1989 when a young Ken Block started screen printing T-shirts, he teamed up with his college friend Damon Way to create the brand Eightball, which they sold to stores with the help of Damons brother, Danny (a pro skater) endorsing the brand. Eightball grew quickly and soon expanded into a 750 square foot warehouse before expanding again and creating Droors Clothing brand. In 1993 the whole business was incorporated into Circus Distribution Inc. unfortunately, Eightball was also retired in this year due to another company claiming ownership of the name.

This led the way for DC shoes, there are a couple of rumours as to how the name DC Shoes came about, one is that it was named after the first initials of the 2 pros that endorsed the brand – Danny Way & Colin McKay, another is it is named after Droors Clothing. DC Shoes saw a gap in the market and set out to create technologically advanced skate shoes as they believed skateboarders are athletes and needed footwear to fit their sport.

DC really promoted their brand by using professional endorsements and by 1997 they had a team of 8 pro’s who went on a World Tour showcasing their skills and DC as a brand. By the end of 1997 DC had also put together a Motocross and Surf Team, seriously cementing their footing in the Extreme Sports market. Through their fantastic coverage and pro’s events like Danny Way jumping 10 feet from a helicopter onto a DC emblazoned ramp. The DC brand not only took over the sports market it began to really grow on the fashion markets as well.

DC produced its first television advert in 1999 alongside its first children’s range, by the early 2000’s DC were shipping globally and taking on general sports and fashion footwear giants like Nike and Reebok.

In 2004 Block and Way made the difficult decision to sell DC shoes to Quicksilver, Block remained a key player in his company and became DC’s Chief Brand Officer which gave him the chance to keep DC’s brand direction and philosophies as well as affording him the time to branch out into other activities. When DC sponsored Travis Pastrana he decided to make the move from the Motocross World to Rally, Block and DC supported him and continued the sponsorship. Realising this could be an opportunity not to be missed Block contacted Travis’s racing team and asked how he would get started in the world of Rallying. Block turned out to have a natural aptitude for Rally Racking and in his first year on the American Rally Circuit Block earned himself the title ‘Rookie of the Year’ and a spot on the Subaru team. Block as with everything he has done threw himself into the Rally world wholeheartedly and with extra training from some of Rallying’s finest and his no holds barred driving style he was soon racking up top finishes.

Block, still of course brand focused used his fantastic driving skills to promote DC even further with the first Gymkhana video. This featured Block pulling some amazing stunts at an airfield, this went viral worldwide. In the UK the Ken Block/DC phenomenon really took off when he appeared on Top Gear with James May in the 2009 series. With Ken Block at the helm and teams of professional skaters, snowboarders, surfers and just about any other extreme sport promoting the brand, DC firmly holds its place as the extreme sports world.

To this day, DC continues to make fantastic ranges of men's women's and children's skate shoes that are prefect for use on and off the board. 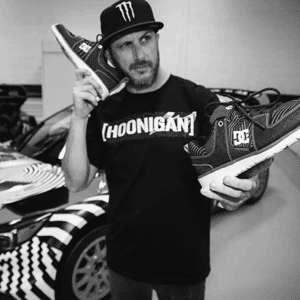 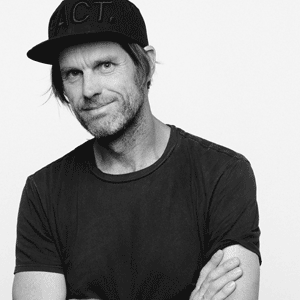