Hush Puppies history began in 1958 when a Michigan sales manager set out to find an alternative to uncomfortable dress shoes, the source of sore feet, or rather “barking dogs” as they were known at the time. And so, the first pair of Hush Puppies was made.

The shoes unique and comfort-driven design meant they were an instant success the second they hit the National Shoe Fair Convention in Chicago. People were mesmerized by the shoes' stark and innovative design which combined a lightweight crepe sole with a brush rainbow suede uppers. By 1959, fashion had changed forever. Shoes went from bland blacks and browns of the 50s and 60s to the comfort and casualness of the new Hush Puppies brand.

In just one year, Hush Puppies sold its first million pairs and by 1963 one-in-ten adults in the United States owned a pair of the recognisable shoes. The brand’s revolutionary and casual lifestyle design was infectious and spread across the Atlantic gracing the feet of some the world’s most renowned celebrities and rock royalty of the time including Prince Phillip, David Bowie, and even Princess Diana.


Rumour has it that a pair of Hush Puppies even saved the life of rock n’ roll legend Keith Richards while he was on tour with The Rolling Stones in California. The story goes that he accidentally touched his guitar against an ungrounded microphone, knocking him unconscious. Medics believed it was the crepe sole on his Hush Puppies that saved him and essentially the world of rock n’ roll.


Hush Puppies became synonymous with the new wave and dress-down generation of the 80s and 90s. The popular, casual brand quickly became the “hip” brand and resonated amongst the youths of the time, earning its status as a world wide fashion accessory and cementing its place as the shoe that bears that “Classic American Style.” Hush Puppies weren’t just a fashion statement, they were a cultural and political trend setter. By 1990 they became so popular that Mikail Gorbachev invited the brand to become the first American company to manufacture and sell footwear in the Soviet Union.

Now, with a presence in over 136 countries, Hush Puppies has earned its nickname as the worldwide worry-free shoes and the iconic and beloved brand continues to set the standard for comfort today. 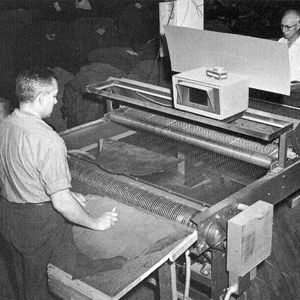