The History of Superga

This Italian brand has been around for over 100 years now. When in Torino, Italy, Walter Martiny first produced his vulcanized rubber soled shoes at the Superga factory, which was named after the Superga hill in Turin. In 1925 Superga first developed their 2750 model, an iconic style that has stood the test of time, still being a mainstay of the company to this day. In 1934 Superga expanded their collection to include a range sport shoes for Tennis, Basketball, Yatching and running trainers as well as casual shoes for daily life.

Briefly halting production during World War II, the Superga factory was re-opened with a renewed mission to bring high quality shoes to the people of Italy. In 1951 Superga merged with Pirelli and expanded the production of their footwear further. The Superga sneakers clean and classic style became a hit within Italy. By the 70s and 80s Superga was being sold worldwide and subsequently the brand created more styles of footwear and expanded into the clothing industry.

The UK has seen Superga employ a number of celebrities as brand ambassadors, including the likes of Alexa Chung, Rita Ora, Suki Waterhouse and many more (as well as being a popular choice of the Duchess of Cambridge, Kate Middleton). The clean and sporty look of Superga has proven to be a hit and the 2750 cotu classic is a shoe that is steeped in nearly a century of history. Available for both men and women in a variety of colours and styles, you can find our range at Mastershoe.co.uk. 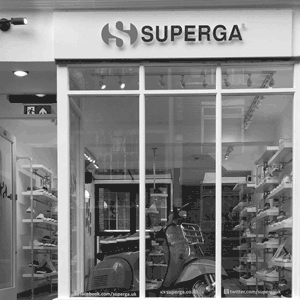