The History of Caterpillar

Based in Peoria, Illinois, Caterpillar has consistently ranked as one of the largest brands worldwide. The brand made famous by their heavy duty tracked vehicles has made sustained progress, helping to inspire change in every continent on the planet. Caterpillar Inc was even involved with man’s first voyage into space in 1969 and the successful landing on the moon. Cat supplied the communications power for this exploration on the Apollo 11 spacecraft and NASA has subsequently used Cat for communications power on all of their subsequent space stations.

Caterpillar Inc can be traced back as far as the Holt Manufacturing Company who first started trading in 1883 as the Stockton Wheel Service company in Stockton, California. Benjamin Holt was the man who developed the continuous track tractor, first tested in 1904 on Thanksgiving Day. At the start of the 20th century, Holt Manufacturing was the leading manufacturer of combine harvesters in the United States and they were heavily involved in steam traction engines.

After refining this technology, Holt’s tractors played a big support role in World War I, shipping 1,200 tractors to England, France and Russia for agricultural purposes, only for the governments to send them straight to the battlefront. The military used these vehicles in place of their cavalry, hauling the heavy artillery and supplies. These tractors were also the inspiration for the development of the British Tank which dramatically changed ground warfare tactics, the Holt tractor remains one of the most important military vehicles of all time.

Unfortunately at this time their biggest competitor and local rival company C.L Best also based in Stockton, had a very similar product devoted to the U.S Farming market. This rivalry resulted in the two businesses spending in the region of $1.5 million (over $20 million today) in legal fees over trademark and patent infringements. This was eventually resolved when they took the advice of an investor and the two businesses merged in 1925 to form the Caterpillar Tractor Co.

In 1930 Caterpillar moved the companies HQ’s to Peoria, and Clarence Leo Best (C.L.Best) took over the role of CEO from Thomas Baxter. Baxter was initially put in charge of moving Caterpillar forward by the banks that held Cat’s debt when Benjamin Holt died in 1920. During this time Caterpillar Inc had gone from profits of $13 million in their first year as the Caterpillar Tractor Company to $52.8 million in Baxter’s final year. Despite this, they continued to grow throughout the 1930’s and they played a major part in construction and mining projects around the world. Their machinery helped to construct the King Albert Canal, Belgium in 1930 and this was their first venture to Europe outside of the war. The government in India brought in the Caterpillar machines to assist the clean up of debris after a devastating earth quake in 1936. They were also involved in the construction of the Pan-American Highway and the Golden Gate Bridge in San Francisco.

By this stage Caterpillar were recognised worldwide, they had assisted heavily in vehicle production for World War II with over 50,000 track type tractors and they launched their first international venture in 1950 in Great Britain. The year before this they integrated the use of the “Cat” trademark.

Today, Caterpillar now has an estimated 125,000 employees worldwide and their sales and revenue for 2013 were recorded at over $55 billion dollars placing them as the leading manufacturer of construction and mining equipment. Their current logo which replaced their early design features the famous yellow triangle, representing Joy and Optimism while the Black font stands for the excellence, power, strength and elegance.

Caterpillar was the main sponsor for the No. 31 car in NASCAR’S NEXTEL Cup Series. The Leicester Tigers, one of the leading Rugby Union teams in the Aviva Premiership and OCEARCH. OCEARCH are leading the way in Shark research and this partnership has allowed them to continue their important work. Their boat MV OCEARCH, relies on Cat’s power at sea. With a team of scientists on board the ships runs on two Cat engines and three Cat generators.

Cat’s systems allow them to run their on board laboratory, in addition to a custom-built hydraulic lift and a 55,000 pound research platform that can take the weight of a 5,000 pound shark. OCEARCH have now already led more than a dozen expeditions to safely investigate the breading, feeding, migration and birthing patterns of these animals and continue their important work at sea.

Today the Cat brand has expanded their range into footwear, clothing and accessories and they now make a vast range of boots for both men and women as well as a range of casual trainers and shoes. 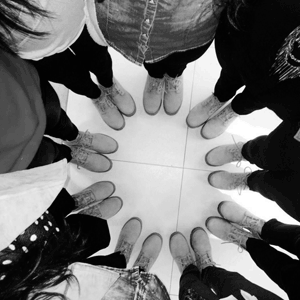